10. The Wabbit and the Place of Water 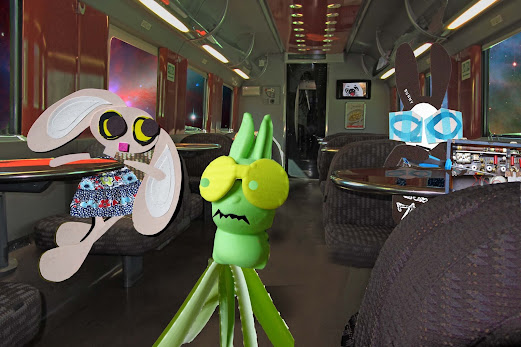 In the dining car of Quantum the Train, the Wabbit fiddled with Device A119. It was rather old fashioned and had seen better days. But it worked. Space Traveller looked out into deep space and worried. "Does he know what he's doing?" Lapinette shrugged. "Maybe." The Wabbit ignored all this. He continued to poke inside the device and hummed gently. "Is that you or the device?" asked Lapinette. The Wabbit hummed a different note, then another. Suddenly Device A119 spoke. "Up a bit and to the left." "Your left or my left?" sighed the Wabbit. "Right paw up a bit until you find the red capacitor." There was a flash. "Ouch," said the Wabbit. "Spot on," said the device; "You have control." The Wabbit sighed again. "Control of what?" "Me," said the device. "Can I have a salad sandwich?" said the Wabbit. "I can promise a panino in due course," replied the device; "but I have to find it first." Lapinette laughed and signalled the kitchens. "What was your function?" continued the Wabbit. "To find water in the moon," said the device. The Wabbit probed with his screwdriver and murmured, "What was the outcome of your search?" The device played a soothing snatch of Cool Water. "I'll take that as a yes," said the Wabbit; "so who did you inform?" "No-one," responded the device; "I have no instructions to tell anyone." An audible gasp shook the dining car. "It was forgotten," said the Device. "That doesn't hold water," grinned the Wabbit.
at July 25, 2017