13. The Wabbit and the Space Kaboom 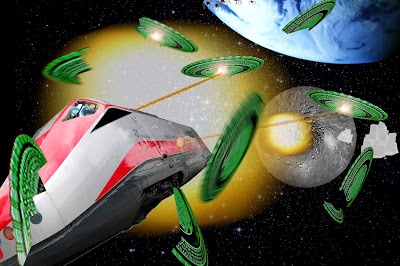 Quantum the Time Travelling Train was technically a merchant craft, unequipped for dogfights in space - but he was fast. "Lattice Drive, Commander?" "No," said the Wabbit. He connected his radio to Device A119 and hummed a simple tune. "Locked and Loaded," said the device. "Wait," said the Wabbit. Device A119 waited, and while he waited he played an electronic tune. "So tired," he warbled; "Tired of waiting for you oo ooh." "Now!" yelled the Wabbit. It was only an instant but it seemed like an hour. Suddenly the lunar surface glowed with a strange yellow light. There was no sound, just heat and light. A fiery blast seared past Quantum. "No-one look back," yelled the Wabbit. New fire added to old. Space was as floodlit as a stadium. Shards of saucers flew past Quantum's hull. A random blast from an Ice Mice craft shaved paint from one of Quantum's plates. "Dead Stop! Engage Lattice Drive!" snapped the Wabbit. Quantum groaned, shuddered and vanished, leaving behind only a light-drenched scrapyard. From a safe distance, Marshall Duetta and her legions of red spiders watched. Something odd was happening. Explosions on the lunar source sprayed water bombs into space. There, they froze into Arctic ice floes and drifted towards earth. Duetta spoke telepathically to her spider army. "Take your positions ..."
at July 31, 2017