12. The Wabbit and the Broken Saucer 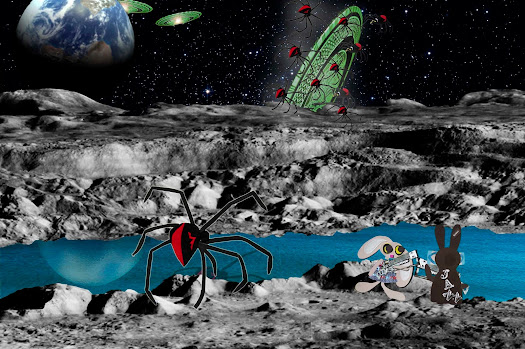 Under the pressure of the red spiders, the saucer plunged and crashed. Spiders swarmed over the surface, but nothing emerged. The Wabbit and Lapinette stared across a river of the deepest blue. "Is it water?" asked the Wabbit. "Not as we know it," said Duetta. Her legs rattled. "I wouldn't drink it." Marshall Duetta stuck a tip of a leg in the water and withdrew quickly. "The molecules aren't quite right." The Wabbit had a thought. "It looks like a reservoir." Lapinette charged her snazer gun. The whine was audible even in the wafer thin atmosphere. "But who's reservoir is it?" Duetta received a signal from the red spiders. "Marshall, there's movement inside the craft." Duetta ordered her troops to smash against the side of the vessel. The Wabbit and Lapinette gripped their snazers. They were expecting a sudden onslaught of Ice Mice, but all was still. "It's too quiet," said the Wabbit. Duetta nodded upwards. "How quiet do you like it?" Saucers emerged from behind Earth and they were fast and furious. "I estimate they'll be here in two hours," said Lapinette. "Call off the spiders," said the Wabbit; "Let them think we cut and ran." "We'll head for the dark side of the moon," said Lapinette. "It's going to be cold," sighed the Wabbit. "We'll heat things up," said Duetta; "Got any CL-20?" "I always do," replied the Wabbit, flicking imaginary lint from his fur. "Lay it under the water," suggested Duetta. "Blasting harms the environment," said Lapinette. Duetta rattled her legs. "If the Ice Mice get here, we won't have any."
at July 28, 2017