7. The Wabbit & the Planet of the Voles 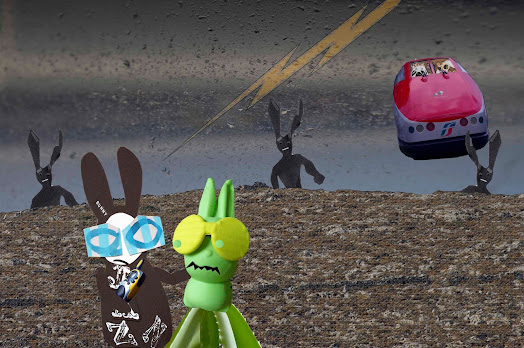 Quantum dropped them off. The planet looked pretty much as the Wabbit had left it, but something wasn't right. The sky darkened and rain fell. Drops prickled the Wabbit's fur. "Acid rain," murmured the Wabbit. "Usually this is when the voles come, remember?" said Space Traveller. The Wabbit recalled his story of the voles with a chuckle. "I made all that up." Lightning flashed. The Wabbit plucked his walkie talkie from his fur, but it crackled aimlessly. A long way above, Quantum the Time Travelling Train wheeled and departed. "I do think we have trouble," sighed the Wabbit. "There they are, the voles," shrugged the Time Traveller; "They're most unpleasant." The Wabbit stared straight ahead. "They're not normal voles." The Space Traveller shuddered. "Voles should stay in their holes." The Wabbit fished around in his fur for ideas. "I'm truly sorry I left you with the voles." Damp droplets turned to lashing rain. The Wabbit tucked his radio away. "It's an off-planet platoon of the Agents of Rabit. Our sworn enemy." The Wabbit hissed harshly but Space Traveller brightened up. "Let's give them a thrashing." Agents charged over the brow of the hill, snickering as they closed on their prey. "Grab onto me," said the Traveller; "We'll give them the round run." The Wabbit did as he was told. With a grimace and a shudder the Traveller began to change. And so did the Wabbit ..
at July 17, 2017