4. The Wabbit and the Market Face-off 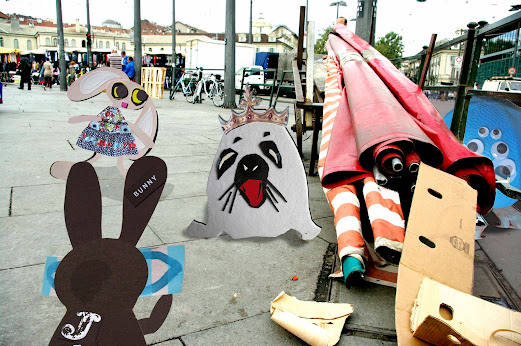 The Wabbit and Lapinette hopped with speed. The Market was closing and they had no difficulty in spotting what looked like a royal seal. The Wabbit put aside niceties. "Are you our seal?" The seal barked twice. "I am at the present time, your seal." "You're in danger," shouted Lapinette; "please come with us." "I was enjoying my break," sulked the seal. The Wabbit launched a fast explanation. "A dangerous ball is looking for you." Tock's voice shrilled from behind the rolled up awnings. "Deliver the Royal Seal to me. You have two minutes left." The Wabbit wheeled round. "Stand down, Tock. Your ticking days are numbered." It was hot and muggy under the glaring sky and they were all flustered. The Wabbit blinked rapidly. The seal tilted his crown over his eyes. Lapinette's ears swayed like fans. Tock's eyes misted over. "One minute," he said sleepily. The Wabbit signalled for the others to wait. Forty seconds, passed - then fifty. Tock deflated a bit and he wheezed. Then he snored deeply. The seal barked and the Wabbit snarled, "Tock hasn't a minute to call his own." The seal barked again. "I'm Silkie the Royal Seal, I've been your seal for years." A sudden hiss of air made them turn. "One minute to detonation," said Tock. The Wabbit grabbed Silkie's whiskers and tugged. "Run for it!"
at July 10, 2017