8. The Wabbit and the Modified Agent 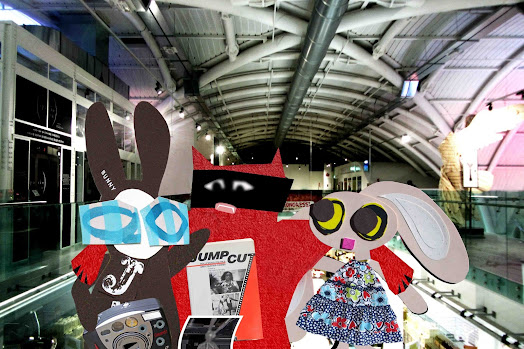 The Wabbit threw Skratch's paw across his shoulders and Lapinette did the same. The Wabbit grabbed the camera and they loped for the exit. Skratch's knees dragged along the walkway. His legs were rubber and his head was worse. He tried to miaow but it was a drawn out moo. Lapinette wore a worried frown. "Where's the bad guy?" she asked. "Inshide" slurred Skratch. But his head drooped and he slumped. The camera whirred and the electronic voice spoke. "Bad guy retained for conversion." The Wabbit shook his head. He hauled Skratch with speed and shouted at the camera, "I want everything back the way it was." "Recognising the wicked," whirred the camera. "Recomposing to good. Commencing modifications." The Wabbit could think of nothing that would halt it. Suddenly the flash fired and a red light blinked. From inside the camera, the Wabbit heard liquid sloshing and he noticed a chemical smell. A print floated out and the Wabbit let it fall. He could see it was the Agent of Rabbit, but the face was heavily blurred and he cursed silently. He wrinkled his nose and looked at Lapinette and hissed. "I wanted him in one piece." Lapinette seized the print. "Do you have another camera?" The Wabbit nodded. "I always have another camera." Lapinette grinned as they pulled Skratch to safety.  "Then I have an idea." The Wabbit's eyes flashed. "Blowup ..?"
at February 19, 2016