2. The Wabbit and the Unstable Image 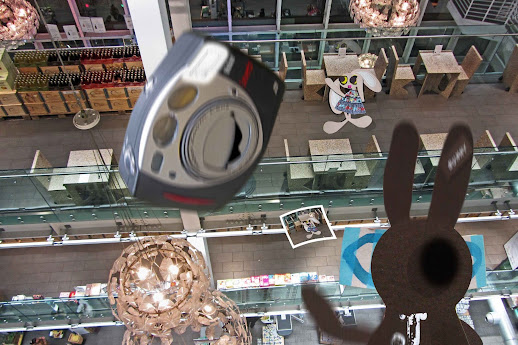 The Wabbit took the camera to a nearby restaurant to examine it in the light. In the cosy company of his fellow diners, he looked it up and down. He pressed every switch and turned every knob. He took the battery out, scraped the terminals and put it back. Finally he whacked the camera on his table. But no matter what he tried, nothing happened. "Oh." said the Wabbit. He made a sound between his 28 teeth that was partly annoyance but mostly disappointment. Just as he'd given up, he heard familiar footsteps and knew it was Lapinette. So he looked over the rail and called down. "I'm up here in the carrot section!" Lapinette looked up and waved. It was a formidable restaurant, world famous for its slow-cooked carrots - and they both met there with monotonous regularity. At that moment the camera whirred, jumped and span out over the rail. Its lens cover popped open and the flash went off, just like the first time. The Wabbit blinked. Now all he could see was a glaring white rectangle. The camera made the same sloshing sound as before, then it gurgled, clicked and ejected a snapshot. The Wabbit made a swipe and grabbed it. There was Lapinette staring out of the photo. Suddenly her image vanished as if it had never been there. The Wabbit rubbed the print with a paw. It was a little damp and smelled of bleach. The Wabbit puzzled as he watched Lapinette's image gradually fade back into the picture but he could hear Lapinette yelling. "Wabbit! Wabbit!"  She was waving something she'd caught in her paw. "Wabbit, you dropped your camera ..!"
at February 05, 2016