7. Skratch and the Arrested Gaze 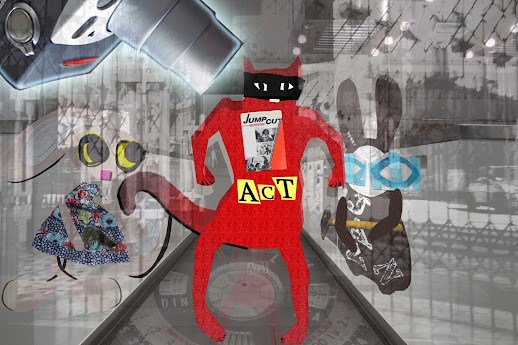 Skratch was framed and frozen. His mind wandered through apertures. He could see the Wabbit and Lapinette but his view was fragmented. They were talking in mirrored snatches. "Is he out?" said Lapinette. "Out and in" said the Wabbit. He noticed Lapinette had a gun. The Wabbit carried a hammer and it looked edgy. "Inside out," said the Wabbit. "Outside in," said Lapinette. Skratch thought hard and searched for an opening. "He can hear us," said the Wabbit. Skratch tried to shout but his miaow got lost in the fragments. The Wabbit was speaking. "He's stuck." Lapinette pointed her gun. "Sticky situation," she yelled. "It's a breakdown," shouted the Wabbit. "Breakdown, breakthrough," screamed Lapinette. Skratch watched the Wabbit's hammer. It twitched. Skratch looked hard at his paw and willed it to move. It was impossible. Layers bound him fast. Three cracks of an automatic rent the air and then everything shook. His paws flexed and his chest expanded and he yelled. "Give it all you got!" Strength flooded through his limbs and he bunched his paws and swung them just like the Wabbit's hammer. Glass crashed as he smashed his way free. He saw himself lying on the floor of a kitchen. The Wabbit was peering down at him and smiling and asking, "Did I get your good side?" They both seemed to fade. "Iris in," purred Skratch as he passed out.

[An iris shot is used in silent films. Iris in - a black circle closes to end a scene. Iris out opens a scene from black.]
at February 17, 2016