4. The Wabbit and the Cat Conversion 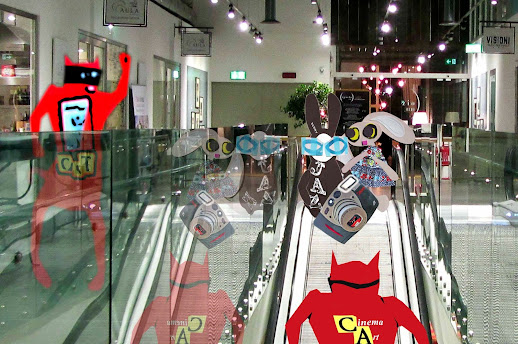 "We've got to sort out this Brownie," said Lapinette. The Wabbit grabbed the camera and made for the escalator. "It's a bench job!" He shook his head in anxious anticipation and kept out of the way of the camera lens. "I don't want to end up in a box."  Lapinette saw what looked like a red reflection. "There's Skratch!" she said with relief in her voice. "He can help!" Skratch the Cat smiled as he rumbled up the elevator. "New camera, Wabbit? Come on, do me a portrait." "No!" yelled the Wabbit in horror. "It's not working." But just at that moment the camera wriggled from his grasp. The shutter snapped and the flash blazed. For a moment nothing happened. "Aha," laughed Skratch. "It's an old fashioned camera. When do I see my picture?" The Wabbit grabbed at the camera. "You'll have to wait." Skratch laughed again. "Someday, my prints will come." But Lapinette was yelling and pointing - and the Wabbit followed her gaze. Behind the glass screen, a lurid comic strip version of Skratch faded into view. He was waving just like Skratch and his mouth was saying something inaudible. Then he dissolved into nothing. Lapinette looked at the Skratch on the escalator. He too was fading fast and before long the escalator was empty. "Skratch will come back," hoped the Wabbit, crossing his paws. Lapinette looked at the Wabbit with big eyes. "Can you fix it?" The Wabbit looked back. "We'll wait and see what develops ..."
at February 10, 2016