The Wabbit and Boredom 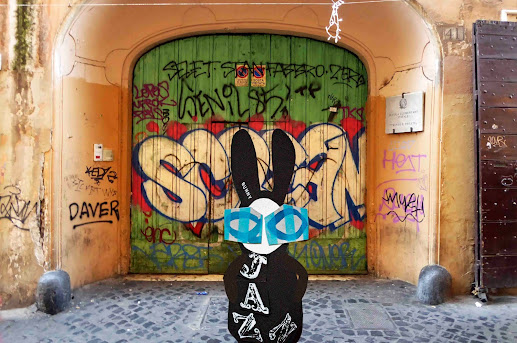 The Wabbit hunched in front of his favourite door. The sign said it was a school, but he had never seen anyone go in or out. So if he was bored he would stand in the street and wonder about it. "What's really behind the green door?" he thought. This kept him occupied for a full five minutes until he got restless. He stomped his feet a little. The Wabbit was between missions, a place he didn't like to be. He preferred to be in the thick of things, not the thin of things. No creature he knew got as bored as he. They all went on vacation or pursued a favourite hobby. Wabsworth his android double liked to bathe in a spa in the hills and return smelling of sulphur. Lapinette went to the furdressers and it took all day, sometimes two. Skratch the Cat attended week long movie marathons and emerged blinking through rectangular eyes. That wasn't to say the Wabbit hadn't tried. He'd taken up several pastimes, few of which had been successful. His jigsaws always missed a vital piece which he later found clinging to his fur. In an attempt at a giant collage, he found himself permanently glued to a table. His sallies into motor sport did, however, meet with success. But they were usually marred by some incident. In a cross country motorcycle trial he was well ahead but pitched into a hole with his scrambler on top of him. There he remained for some time until spotted. The Wabbit thought and thought and thought. Then it came to him in a flash. "Thinking is a hobby!"
at January 06, 2016