4. The Wabbit and the Missing Page 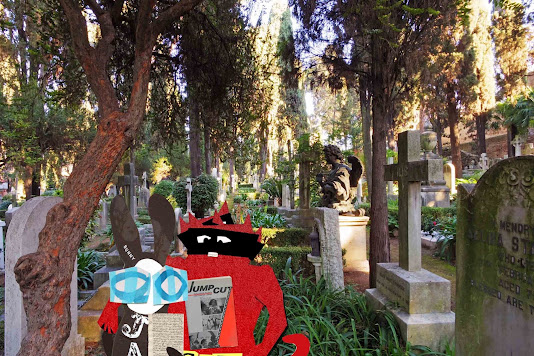 Skratch took the Wabbit aside. At that moment, rays of light shot through the trees to paint dappled shadows on the Wabbit's ears. Skratch handed over a single page of an old manuscript. "With your permission, I'll tell the story." The Wabbit scrutinised the parchment and turned it over. "The occupants of the cemetery ..." Skratch had hardly begun when the Wabbit interrupted. "Spirits." Skratch nodded his heads. "These are rather famous spirits with lot of time at their disposal." He paused for effect, but the Wabbit didn't look up from the page, so he went on. "Writers and philosophers all, they collaborated on a codex that would open the Gates of Perception. "Most unwise," muttered the Wabbit and he flipped the page over again. "Eventually," meowed Skratch. "that's what they thought too. So they removed this vital page and hid it." Only now did the Wabbit look up. "When was the codex stolen?" Skratch thought the Wabbit far too sharp for his own good and placed a cautionary paw across his shoulder. "Stolen last week." he sighed. The Wabbit shrugged annoyingly. "The Codex is worthless without this page." He shrugged again. "So whoever took it will be back." "And they'll be looking for that page," said Skratch, "... which is now yours." At last the Wabbit's 28 teeth assembled into a grin. He rolled up the page and shoved it deep into his fur. "First they have to find us ..."
at January 18, 2016