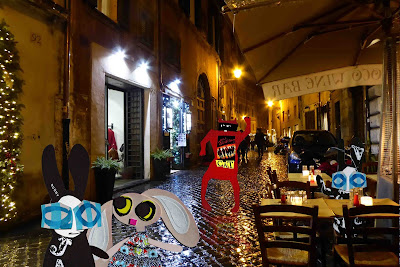 "Here it is!" Lapinette was delighted with her new find. The Wabbit grinned a lopsided grin. "But there's Wabsworth in your new caffè." Lapinette sighed. "You can't keep anything a secret," A red reflection glistened momentarily in the wet street and a loud purr announced Skratch the Cat. "What a pleasant surprise!" he meowed, "I was going to visit the cats of Rome. But I can do that tomorrow." The Wabbit gestured for prosecco and tramezzini all round. Wabsworth rose for Lapinette to take a seat and turned to Skratch. "What was that for a kind of adventure?" Skratch warmed his paws. "I've been thinking about it," he purred. "It was a reconstructivist post modernism, which transcended iconic representation." Lapinette hid a smirk and sat down.  "Archetypal revisioning," she said firmly. Now the Wabbit sat down and shrugged.  "I thought it was about movies." "Quite right," said Wabsworth, "a post-ecodical trauma unfolded." "With us in it," smiled Skratch. "Can you dig it?" repeated the Wabbit. "Diggin' dystopia?" laughed Lapinette. "Sounds like a possible musical," murmured Skratch and he made a note in his fur. The Wabbit's tummy rumbled loudly so Lapinette handed him a sandwich. "Thanks," said the Wabbit, rubbing his stomach. "I seem to have to have a touch of dystopia."
[tramezzino: a triangular sandwich in Italy, From tra (between) and mezzo (middle)]
at January 04, 2016