6. Jenny and the Ghostly Blast 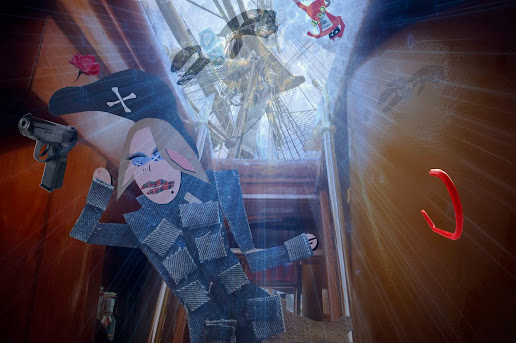 The blast took them by surprise. It was all the more sudden since it arrived without warning of sound. But the shock wave sent Jenny spiralling down into the ship and she cursed as her automatic and her hook clattered down the ladder. Then she caught sight of the Wabbit's reflection. He was sailing through the air in an elegant trajectory and appeared to be coping. Jenny looked away and back. Skratch was waving and yelling something about the code but she couldn't quite make it out. Then she felt something tugging at her coat. Whatever it was, the thing grabbed her hat and threw it at the bulkhead - so she tried to bat it away. "No-one touches my hat!" she yelled. There was nothing to be seen. Just a disturbance in the air like heat on a tarmac road. But it was there all right, grasping and groping Jenny with invisible fingers. "You scurvy, jelly-boned apology for a piece of a ghost!" shouted Jenny. The spectre replied by trying to detach her boots. Jenny kicked it to no avail and looked up again. Now she saw the Wabbit waving and pointing and she realised what it was. She reached into one of the many coat pockets and touched her part of the codex with a paw. The spectral claws loosened. Then she heard a drawn out sound like the dying gurgle of a drowning pirate. The thing seemed to draw back and she was free to tumble. Jenny hit the deck and rolled into a corner and mumbled to herself. "I'm in one of the Wabbit's nightmares ..."
at January 22, 2016