3. Skratch and the Astral Plane 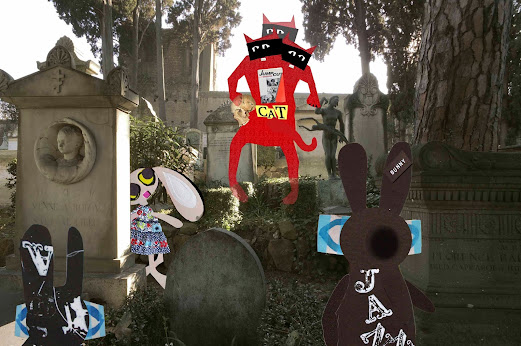 The voice came from the old graveyard. Tombs lay in dense undergrowth and they ventured in. Skratch hovered slightly above the ground and seemed quite content. "I'm on the astral plane," he purred. "I did not summon you." The Wabbit felt slightly vexed. "You're dreaming," he with a shortness that surprised Lapinette. "No, I was meditating," meowed Skratch, "and now I'm in touch with everyone in this cemetery." Lapinette butted in. "Why have you got three heads?" Skratch nodded them all. "I met Cerberus and we got chatting about heads and numbers." The Wabbit became impatient. "Why are we here?" Skratch's left head nodded. "You, Wabbit have to perform a task." The Wabbit shook his head vigorously. (He had only one and felt it quite enough.) "Who says?" he snapped. Skratch's three heads bobbed. "The occupants of the graveyard." The Wabbit scowled.  "I have enough managers," he said. "Let them talk to the Department." "Skratch's heads meowed all at the same time. "I'm afraid they insist on you, Wabbit." "And what if I remain untasked?" asked the Wabbit. Skratch hissed three times. "Then I'm afraid we all remain here." The Wabbit thought hard and his nose twitched. "What about you, Wabsworth?" Wabsworth groaned. "I don't think I can cope with a three headed Skratch for long." "OK," said the Wabbit. "You Lapinette?" "Let's see what they want," smiled Lapinette and she waved at Skratch's heads. The Wabbit shrugged. "Maybe three heads are better than one ..."
at January 15, 2016