5. The Wabbit and the Blues Beepers 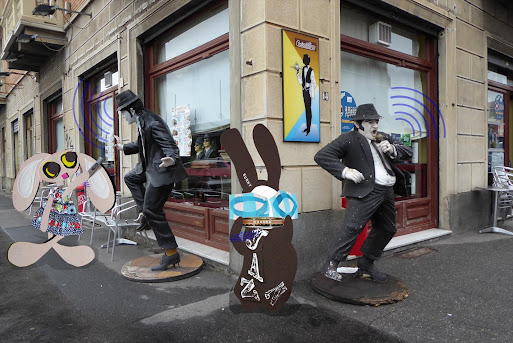 They chased the beeps through puddles but when the street dried they lost them. "What the..?" said the Wabbit. It was then they heard it. Floating through the air. These were softer beeps with more beeps to the bar. "Beep beep beep. Beep beep beep beep." A tall figure leaned forward, one of two characters on the corner. "Just musicians ma'am. No cause for alarm." They rubbed their eyes in amazement but the two singers were still there. Now it was a driving beep. The Wabbit's head started to nod and his feet began to tap. Lapinette found herself swaying and she just couldn't stop. The Wabbit rummaged and pulled a blues harmonica from his fur. Lapinette found an old microphone in her frock. "That beep beep beep," sang the Wabbit. "Knocks us off our feet," sang Lapinette. "We really had to leap," sang the Wabbit. "But we didn't dig the beep," warbled Lapinette. The Wabbit's harmonica wailed louder, then beeped and mysteriously stopped. "You got trouble?" asked the tall singer. The Wabbit nodded his head. "The beeps want something. We're chasin' the beeps." The singers chuckled and looked at each other. "Don't that beep all!" The Wabbit's grin was lopsided and the tall one took pity. "They're here, round the back," "It's the scene for beepniks," said the other. The Wabbit and Lapinette raced round the corner and out of sight. The musicians stared after them. "Was that the Blues Bunnies?"
at November 11, 2015