4. The Wabbit and the Rainy Leap 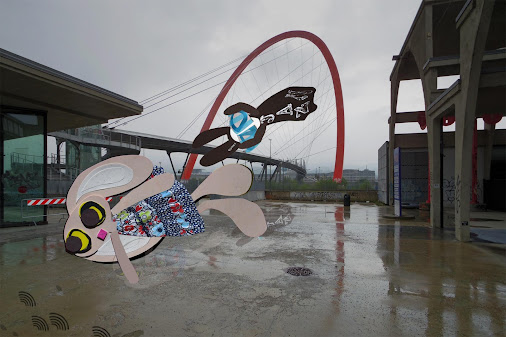 The Wabbit had to take a decision and he thought it better be fast. He grabbed Lapinette by the fur and pushed her over the bridge. "Leap!" he yelled and then he leaped too. It was a long way but the sound of lashing rain covered the beeping and for a moment things seemed calm. Lapinette looked down. She picked a clear spot, adjusted her ears and spread out. The Wabbit squinted at the ground, scrunched his shoulders and started to roll in a ball. Their plummet seemed to take a while so the Wabbit thought about the beep and tried to figure what it wanted. Lapinette also tried to figure what the beep wanted. Then she mentally cancelled three appointments, replacing them with one at the furdressers. The ground approached.  Lapinette could hear it coming because every drop of rain that fell made a squelchy beep. The Wabbit hit the ground with a thud and rolled across the puddles. Lapinette threw her legs forward, her arms back and landed as gracefully as any seabird. The wind dropped but the clouds continued to throw rain. Liquid beeps filled the air and the old abandoned shopping centre echoed them. It was a raindrenched symphony that alerted the Wabbit to something and he tried to grasp its meaning. Suddenly the rain stopped and with it, the beeping. Lapinette saw the Wabbit's face. "Did you get it?" The Wabbit shook his head. The beeping started again. "The beep goes on," sighed the Wabbit.
at November 09, 2015