2. The Wabbit on the Tough Turf 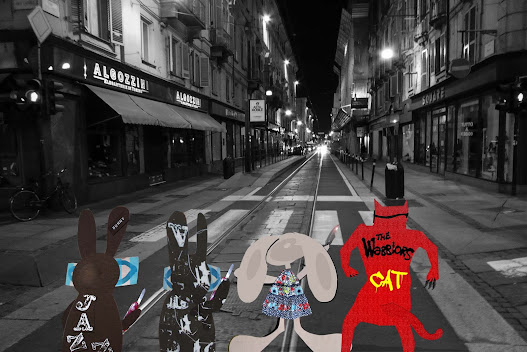 "There ain't no-one on this street," muttered Skratch. The lightning had stopped and the hot storm with it. And now it was calm. Ice calm. Buildings looked like they came out of the chiller and the streets were deserted. But that didn't mean there was no-one. The road vanished to nowhere and from nowhere came a sound like a call. It was a haunting call that froze the blood and suddenly there were as many calls as cobbles on the road. Lapinette hopped forward. "This isn't our turf. We need to cross it." From her frock she drew an edged weapon that glinted in whatever light there was. "It's not a normal night and these aren't normal streets." The Wabbit and Wabsworth searched their fur. Finally they drew the only blades they had. "A multi purpose kit is better than nothing," muttered the Wabbit. Skratch the Cat didn't look in his fur. A powerful snick stabbed the night and razor-sharp claws shot from his paw. "Who's making the rumpus?" Lapinette stared hard into the distance. "The Fugues. Small time. Normally our paths wouldn't cross." "Maybe the Metro's running," suggested the Wabbit. "They're between us and the Metro," said Lapinette. Her eyes smiled for an instant. "Fugues can't remember much." "So maybe they'll forget themselves," quipped Wabsworth. The Wabbit grinned a sceptical grin. "So are ya ready to rumble?" "I'm a cat," said Skratch. "We always are."
[Lightroom credit:  Mick Warne]
at November 20, 2015