4. The Wabbit and the Trail of Spits 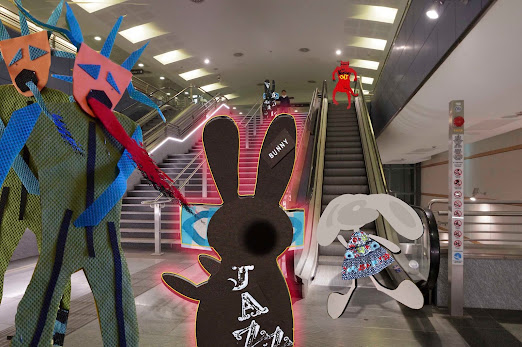 Lapinette thought they'd got off light. The station looked deserted and they headed for the exit. But from the corner of her eye, Lapinette saw another gang. "Oh no, the Spits!" she thought. "I heard they were were all inside." They'd managed to corner the Wabbit and stood over him flapping their tongues and scoffing. "Rabbits. Ha Ha Ha," said one. The other spat a trail of ghastly gob and snorted heavily. Then he spat again. Lapinette kept running but she could hear the Wabbit talking and hoped no spit landed on the Wabbit's fur. His fur was real enough but it was interwoven with anti-matter and chemically volatile. She knew what might happen and ran faster. But her sharp ears heard the Wabbit winding them up and she knew the Spits were getting furious. With an enormous burst, one of them launched a long trail of phlegm that coiled through the air and landed splat on the Wabbit's fur. Lapinette ran even harder but she risked another glance back. One of her favourite games was Candy Crash and that was exactly what it looked like. The Wabbit's fur glowed red and there seemed to be more than one Wabbit. Then the Wabbit's fur threw modified spit to all corners - and everywhere it landed it exploded threefold. Lapinette was nearly at the top of the escalator. It occurred to her that the exit looked within spitting distance and she firmly pushed that thought away. She narrowly avoided exploding fountains of spit and dived through the exit. "Whatever's next on the street," she sighed, "it can't be as awful as this ..."
at November 25, 2015