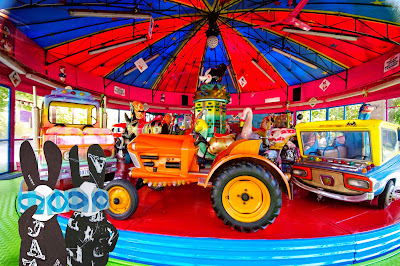 "We could site a Big Dipper over there," said the Wabbit. Wabsworth scanned the middle distance. "What about a Ghost Metro?" The Wabbit grinned and winked. "It could burst shrieking from underground." The Wabbit had come across an abandoned fairground ride and caused it to be located at the rear of the Department of Wabbit Affairs. There, he was slowly renovating it. That caused much amusement to his team, but the Wabbit paid no attention whatsoever. He had succeeded in making a device that played hurdy gurdy music using three old fiddles and a computer keyboard. This made rather a ghostly sound that aroused speculation on dark moonless nights when the Department worked late and the Wabbit was practicing. "About the Dinosaur Fund?" said Wabsworth. The Wabbit's android double was an exact copy but a lot had happened since inception. He looked at the rides and touched the Wabbit's shoulder affectionately. "Things go up and down." The Wabbit was unphased. "Fluctuations in the market?" "In our favour," smiled Wabsworth. "For a while we had more funds that exist anywhere." "How long did that last?" asked the Wabbit. "20 minutes," said Wabsworth. The Wabbit saw his plan for a Wabbit Land Pleasure Park disappear in a single instant. So he thought for a while. "What kind of Market do we need, a Bull or a Bear?" Wabsworth smiled broadly. "A Beer Market," he chortled
at May 04, 2015