6. The Wabbit and the Standing Start 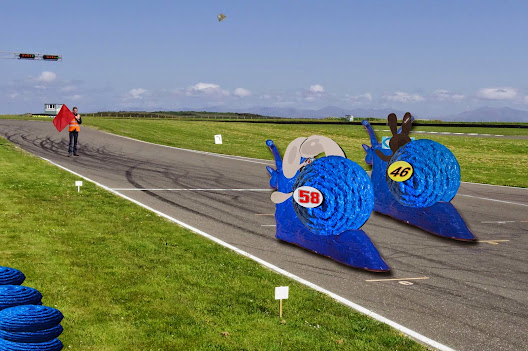 Mo and To whizzed round the track on a warm up lap and slithered to a halt on the grid. The Wabbit bent down. "To. Remember to deliver power to the track at all times." "No flying" murmured Lapinette to Mo. "No traction, no speed," said the Wabbit. "Stupid rules," grumbled Mo and To and they grinned at each other. Lapinette and the Wabbit felt Mo and To vibrate like tuning forks and heard a whine as the MoTo Snails powered up. The Wabbit's teeth rattled and he gripped To tightly. The wind from the sea was icy. He glanced at the sky for any sign of sun and suddenly pointed. "What's that?" "Oh," said Lapinette, "you always get birds at a race track. They're defending their territory." "Silly winged things," said To. The Wabbit was a little tense. "Well I wish they wouldn't swoop today, they have all week." That's not a bird," said Mo. "Its the fake vote from the ballot box." "The one that scratched me with its claws," growled the Wabbit. They were so busy watching the flying vote, they nearly missed the start. The Marshal with the red flag walked between them and was gone. They all stared at the lights. For a moment the flying vote landed on the gantry, fluttered and flew high into the air. At that instant the red lights went out. With two sonic booms. Mo and To vanished round the first corner. The wind tore at the Wabbit's fur, but from the corner of his eye he could still see the fake vote hanging like a bird of prey. "Why don't you fly south for the winter?" hissed the Wabbit.
at May 20, 2015