5. The Wabbit & the Pit Lane Incident 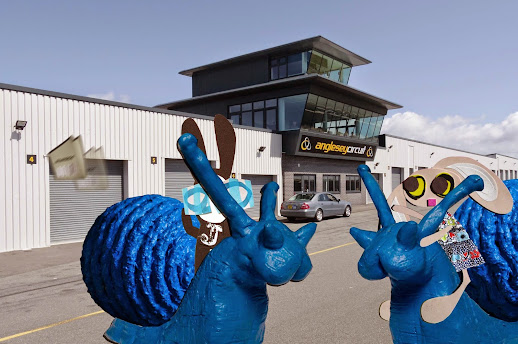 The Wabbit shouted "Mount up," like he'd seen in Westerns. Then Mo and To set off at a cracking pace along a cliff side path only to emerge at what seemed at first sight to be an aerodrome. But this was no aerodrome. With the ballot boxes and fake votes safely concealed in a cave, the Wabbit put his concerns on hold and grinned at the view. "Race track!" shouted Mo. "Speed Trials!" yelled To. A hollow voice boomed from the Tannoy system and echoed down Pit Lane. "Late registrations for the MoTo snails have been authorised by the Chief Track Marshal." The voice continued with technical details at enormous length until the Wabbit could take no more. He bent down and spoke quietly. "Is this part of your Quest?" Mo and To waved their antennae. "Yes, it's a test and a trial," said Mo. "Speed, endurance and technique," uttered To. The Wabbit nodded gravely, but something was scratching at his back and he didn't want to start a race with discomfort. "What? Get off! Grrr." "Look!" said Lapinette. She pointed at a rogue ballot paper that appeared to have stuck to the Wabbit's back. Suddenly the Wabbit felt sharp claws detach from his fur and he looked round as the fake vote floated into the air. The Tannoy system boomed suddenly. "Mo, To, Lovely Lapinette and The Wabbit to the starting grid." "The floating vote will have to wait," sighed the Wabbit, "but where on earth is it going?" The MoTo Snails' shells hummed softly and the snails started to move. "How is that done?" murmured Lapinette. "Superconducting quantum solid state technology," replied To. Lapinette smiled. "Any instructions?" "Stay cool," laughed To.
at May 19, 2015