4. The Wabbit and the Fake Votes 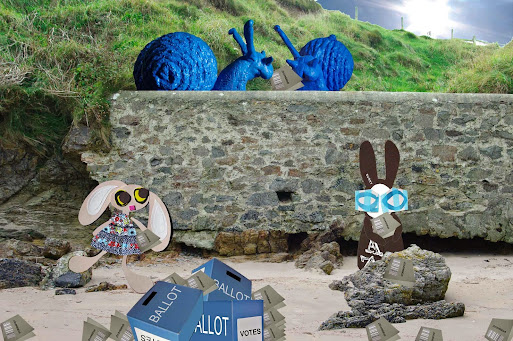 The Wabbit and Lapinette hauled the ballot boxes to a secluded cove nearby and there they opened them. "What shall we do?" asked Lapinette. "We should count the votes," replied the Wabbit. Lapinette nodded - because she knew the Wabbit was inclined to excessive formality. As the Wabbit counted, he examined each ballot paper and made piles as he'd seen in election counts. A breeze sprang up and Lapinette pursued papers that drifted across the beach. "They all say 'No'", murmured the Wabbit. "Did you spot any votes for 'Yes'?". Lapinette shook her head. "Can we eat them?" called Mo, who had a snail's liking for cardboard. "I don't suppose it matters," said the Wabbit. Mo and To nibbled the ballot papers and snorted. "They taste awful." The Wabbit scrutinised bar codes and frowned. Then he sniffed a ballot paper and wrinkled his nose. "There's something strange about these."  He turned and called to Mo. "What do you think?" Mo waggled his antennae. "They smell of decay." The Wabbit looked at Lapinette and moved his ears from side to side. Lapinette knew matters were serious. She sniffed the ballot papers too, then jumped back in revulsion. "Yeugh". The Wabbit sighed and sniffed again. Then he put an ear close to the papers for a very long time. He sniffed once more. His head rose and he looked out to sea. They all waited as minutes passed. "These voters don't exist," sighed the Wabbit. Lapinette shifted uneasily and gave voice to the question that hung in the air. "Why?" The Wabbit let the paper drop from his paw. "Because they're dead."
at May 14, 2015