2. The Wabbit and the Distant Horizon 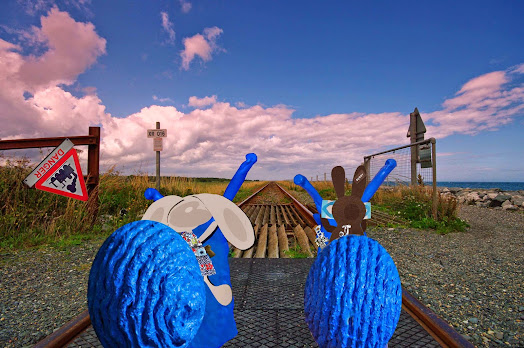 Mo and To told their friends they could bring a few items with them and the Wabbit and Lapinette were taking no chances - because they knew anything could happen on a Quest. Although they might meet friends, the Wabbit reasoned they would certainly meet enemies too. "Sometimes," said Lapinette gravely, "it's hard to tell them apart." Mo and To glided easily across the rugged terrain and as they slid along, they solemnly changed the names of everything they saw. This was some kind of ritual and the Wabbit joined in. Trees were called stones, houses became cars and, curiously, fences were named giraffes. Mo and To reached an old single railway line and wheeled to face the horizon. "This is our path," said Mo. "More of a track," said To. Lapinette squinted her eyes and stared down the railway until she could see no further. "Are we on the right lines?" quipped the Wabbit. "What about trains?" asked Lapinette. "We'd have a long wait," said To with a rude gesture of his antennae. "Government Cuts," grimaced Mo. He ejected a stream of slime and slithered in it. Lapinette flapped her ears. "I thought I heard something." "It's the sea," said Mo. "No it's the land," said To. "It's the damp whispering grass," snorted Mo. They looked at each other and laughed and wouldn't stop. The Wabbit jumped down, put his ear to the track then sniffed. The metal felt cold and smelled of verdigris. "Sounds like a plane ..."
at May 11, 2015