14. The Wabbit and Judgement of Time 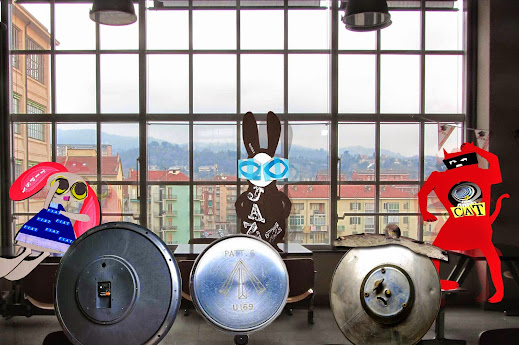 The Wabbit hopped on a desk and tried to look stern. This was a bare room sometimes borrowed by the Wabbit for interrogations. But it belonged to the Crimes Against Time Agency (CAT), which had set the investigation in motion. The three Zoners looked so subdued that the Wabbit felt somewhat tolerant. Skratch shook his head, then scratched it. "Psst," he purred to the Zoners. "Shuffle your feet and wring your hands." Tipsy waved to attract the Zoners' attention. "It's better for you in the long run." The Wabbit paused for a very long time and although the clocks couldn't sweat, a little machine oil trickled down their faces. "You can't go around collecting time!" yelled the Wabbit. The Zoners muttered that it was only a bit of fun. The Wabbit shoved his paws deep into his fur. "It causes time turbulence, which gives others a rough time." There was silence. "Every time I turn around, there's trouble!" shouted the Wabbit. The Zoners nodded, so the Wabbit continued. "There's a time and a place for everything." In the silence that fell, the Wabbit realised he didn't dislike the Zoners and smiled to himself. "As regards a suitable penalty. I've hardly had time to think." The clocks wrung their hands and the Wabbit pointed. "You will remain in Time Zone Zulu." The clocks shuffled their feet so the Wabbit thought for a while. "You will keep accurate time." The Zoners looked rueful. "Anything else?" "Yes," said the Wabbit. "Time off for good behaviour."
at May 01, 2015