5. The Wabbit Looks On 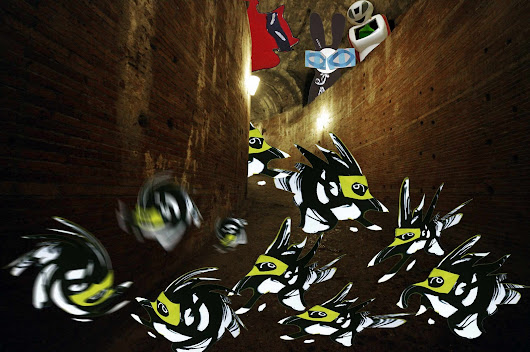 Skratch, the Wabbit and Robot started to call out to the Skuttles and their voices echoed through the dank corridors of the castle. "We're drinking ripe red wine," shouted the Wabbit. "Barbera d'Asti 2003," yelled Skratch. "And we're eating biscuits and cheese," droned Robot electronically. "Lovely biscuits to dip in the wine," shouted the Wabbit. "The delicious and tasty red wine," sighed Skratch. Then they waited silently on the ledge above the passage. They waited for quite a while. "Do you think they heard us?" asked Skratch. "Shhh," said the Wabbit. Then suddenly and without warning, the Skuttles came tumbling round the corner of the passageway and headed in the direction of the cellar. They bounced from the walls and whirled around and sang in a low musical tone. "Red red wine, red red wine," was all the Wabbit could hear and the sound got louder and louder until the passage boomed and shook. The scampering of Skuttle feet began to drown out everything else as they kept coming and coming. More and more creatures piled down the slope to the cellar and they tripped and fell over each other until the passage was a yellow carpet of Skuttles. The Wabbit clapped his paws with glee and turned to Robot. "What was that about biscuits?" he asked. "I made that up," said Robot. The Wabbit's stomach rumbled. "Now I'm hungry," said the Wabbit.
at January 22, 2012