7. The Wabbit is not a Number 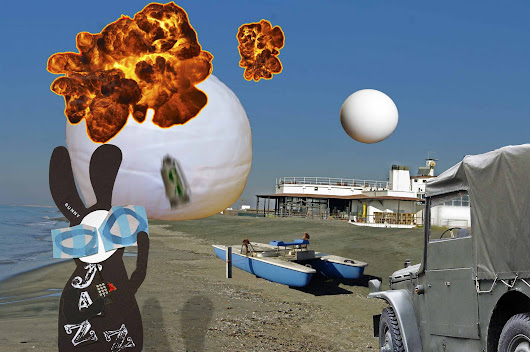 Whoever was controlling the balloons seemed to realise what the Wabbit had in store. The balloons retreated and the Wabbit drove furiously along the beach in hot persuit. With a pawful of C4 he bounded from Fuoristrada and pitched the first canister with a deadly curveball grip. The first balloon couldn't avoid the swerve and the Wabbit pressed the detonator. There was a sudden bang and a flash that spiralled upwards and outwards in a widening red cloud. "Take that for your trouble!" shouted the Wabbit as he followed with a second canister. The balloon began to deflate and emitting a low groan it fell slowly towards the beach. The second balloon hung back, but the Wabbit could hear a booming sound as if it came from a loudspeaker inside. "You are only a number, Commander Wabbit, and your number is up," said  a disembodied voice with plummy vowels. "I have no number," replied the Wabbit," "I am the Number 2," said the pompous voice. "Then you're playing second fiddle to a burst bubble," laughed the Wabbit. "You will regret that action!" said the voice. "He reached for the sky and it blew up in his face," said the Wabbit. "You will be shaped to fit," said the voice. "I take whatever shape I wish," said the Wabbit. He turned his back on the balloon and hopped away - and as he did he threw the last canister over his shoulder. "Be seeing you!" murmured the Wabbit as he pressed the detonator.
at January 14, 2012