3. Lovely Lapinette and the Castle 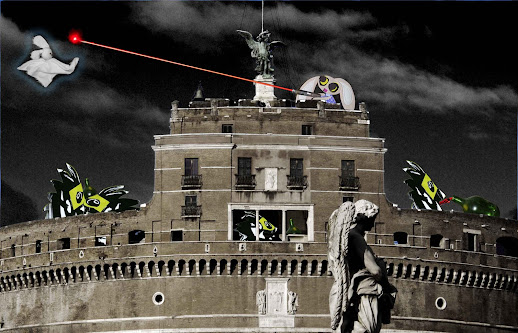 Ghost Bunny flew across the city with the Wabbits instructions in mind. She hadn't long expanded her square search pattern when she saw something interesting. "Investigating red light to my port side," she mused in a nautical terminology she had learned from the Wabbit.  Down by the river she saw a strange castle and at the top of the castle she noticed a figure aiming a red laser beam high into the sky. Ghost Bunny circled cautiously. It was definitely Lapinette, but below her there were scores of Skuttle guards drinking red wine. Ghost Bunny listened carefully to their chanting, "Red red wine, make us feel so fine, monkey pack him rizla pon de sweet dep line," they sang and wobbled unsteadily. Ghost Bunny, who had been introduced to reggae by the Wabbit, smiled craftily because she knew the Skuttles were very near to complete collapse. She soared straight down the laser beam to a waiting Lapinette. "That didn't take long," said Lapinette. "The Wabbit initiated a square search pattern,". said Ghost Bunny. "Did he talk about port and starboard?" asked Lapinette. "At length," said Ghost Bunny, Lapinette smiled. "It  worked," she said. "How shall we extract you?" asked Ghost Bunny. "I have a plan," said Lapinette," so pin back your ears and listen." Ghost Bunny listened attentively until Lapinette had finished. "I see," said Ghost Bunny, "it's all about wine and trickery."
at January 19, 2012