The Wabbit and the Roving Balloon 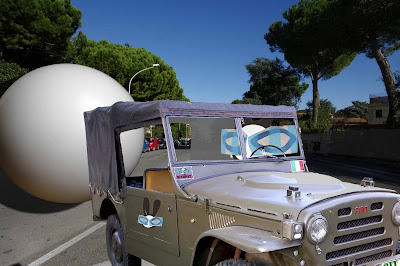 The Wabbit had taken Fuoristrada out for a spin and was cruising down the Via Piccolomini, when he felt something close behind him. "Road hog!" muttered the Wabbit as he put his foot down. "That looks like Rover," said the Fuoristrada, "I'm off." "That's not a Rover," said the Wabbit as Fuoristrada swerved round a corner. "They're boxy and appeal to those of mature years." "You don't watch enough old television," said Fuoristrada and he picked up speed. "It's after us!" A giant white balloon swam into view in the Wabbit's mirror and he heard it make a muffled roaring sound as it got closer and closer. "Perhaps someone's making a film!" shouted the Wabbit as they lurched into the Via Leone XIII. "Perhaps someone's trying to kill us," said Fuoristrada. They dodged between a lorry, two coaches and a refreshment kiosk before careering into the Via Aurelia Antica on two wheels. "We'll lose him in the Villa Pamphilj Park," said Fuoristrada and he shot across the road, through a small gate and into the trees. But the white balloon was still hot on their heels. "Got any ideas?" yelled the Wabbit with chattering teeth. "I'm looking for a path with sharp twigs," said Fuoristrada.
at January 09, 2012