The Wabbit & the Saints Adventure Caffe 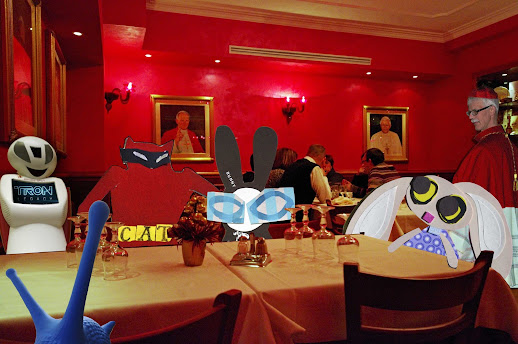 The Wabbit waited as his friends assembled at the table because he was going to make a short speech. "Don't go on and on," whispered Lapinette. "Who me?" said the Wabbit and he cleared his throat. "I was just going to thank everyone for their support." "Where are the others?" asked Skratch. "Collecting the food ordered from my electronic menu," said Robot. "Well, I'm making a preliminary toast, while we wait," said Skratch. "Do proceed," said the Wabbit and he lifted a glass. "To Saint Barbara," said Skratch. The Wabbit looked questioningly. "The Patron Saint of explosions," said Cardinal Lapin. "Oooooh," said the Wabbit. "And the Italian navy," added Skratch. "Then that's the perfect Saint for me," said the Wabbit. "It should be St Denis," said Lapinette. "Why he?" asked the Wabbit. "Patron Saint of headaches," laughed Lapinette. "Saint Elizabeth of Hungary is for Lapinette," said Skratch, "since she is so very lovely." "I really can't help it," said Lapinette. "Is there a Patron Saint for me?" asked Snail. "St Anthony is the Saint who deals with hunger," said Lapinette with a grin. "Surely there must be one for me too?" asked Skratch. "St Dismas," said Cardinal Lapin, "he's the Saint of reformed thieves." The Wabbit was beginning to hum a tune. "How I want be in that number," he murmured. Everyone turned to stare. "When the Saints go marching in!" sang the Wabbit.
at January 04, 2012