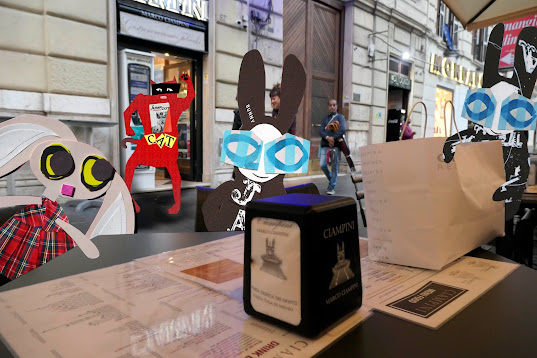 The team assembled at the designated Adventure Caffè. Rain was just starting - umbrella sellers had already hit the streets. The Caffè was in the shopping district where Wabsworth had been buying shoes and he plonked them on the table. The Wabbit barely glanced at them but he made a comment. "I didn't know you liked shoes, Wabsworth." Wabsworth was an android copy of the Wabbit, but he had his own opinions on shopping. "It's cyber-Monday. I got 50 per cent off loafers." Lapinette grinned. "I gave Wabsworth my card. I'm a Super Friend of Geox." The Wabbit shrugged. Whatever Monday it was, he knew that commercially, it may as well never have happened. "There's Skratch," pointed Lapinette. Skratch emerged from the Caffè and waved. "What was that for a sort of Adventure you just had?" They all considered. "It was a kind of children's story," said Wabsworth. "But what kind of a children's story?" responded Lapinette. "It was a colour story," meaowed Skratch, "Colour is a semiotic induction. It engages with the unconscious to perform the labour of imagining." The Wabbit chipped in here. "I think my Adventure story tasted pink." Skratch meaowed hard and long. "It was pink all over." Lapinette shook with laughter. "Are you referring to semiotic metaphor?" Skratch laughed. "I might have been. But the overall tone and appeal was definitely pink. So it was a dual sign, picture-story event." Lapinette looked pensive. "Hmm. The sign is generative and generates another system of signs which also functions as a sign." The Wabbit sighed and called for the waiter. "I need a strong pink drink."
at November 28, 2022