2. The Wabbit and Something Pink 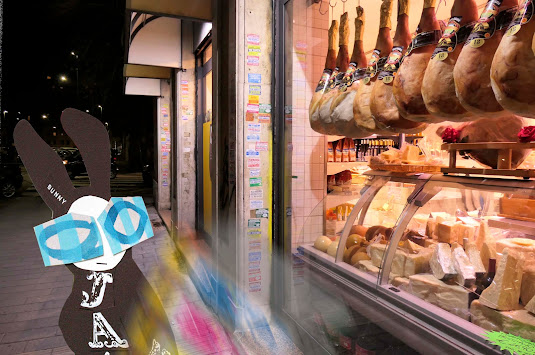 The Wabbit and the print cartridge continued their journey, when night fell as suddenly as a stack of cards. Everything took on a different hue. Car headlights carved through the evening air. Shop windows growled at the street. They passed a delicatessen. The print cartridge turned into a blur. It was true that he was mostly pink, andhis colours blended with security stickers at the side of windows. "Pink, pink, pink," cried the cartridge. The Wabbit ignored him. He stared at the assembled food, particularly the cheeses. He was fond of a bit of cheese and his mouth watered and his tummy rumbled. The cartridge zoomed around. "I like this window, it's mostly pink." The Wabbit was thinking of a salad sandwich with mostly cheese. "But you can't eat pink," he observed. "Yes, you can," replied the cartridge. "There's rhubarb, grapes, radicchio, loganberries ... all sorts." The Wabbit thought of a few himself - mainly in self-defence. "Taramasalata, beetroot ... and pink oyster mushrooms." Told you so," said the cartridge. The Wabbit shrugged and continued with beverages. "Rose wines of all sorts, Pink Prosecco." He was now in the spirit of things and smiled. "Perhaps I could entertain you with a glass of something pink." The cartridge stopped zooming around. "Sounds nice. Maybe I could spice up my pink ink." The Wabbit steered the cartridge round the corner to a small bar he'd seen advertised on the internet. "That will be just pleasantly pinkalicious."