5. The Wabbit and the Rooftop Nature 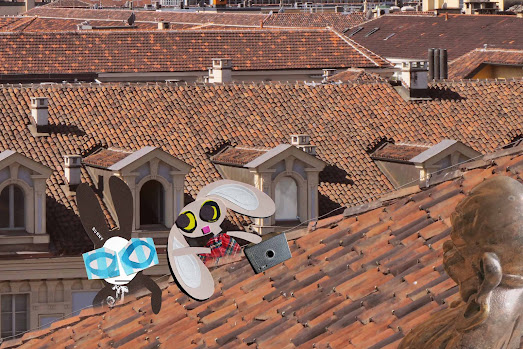 Lapinette and the Wabbit found themselves scrabbling on the edge of the rooftops. They were staring at the Buddha from the Box Camera. Lapinette had the Box Camera with her, but she couldn't recall picking it up. The Wabbit scowled and clambered onto the roof. "What gives?" he said. "The Roof is on the Rabbits," said the Buddha. "If you like," responded the Wabbit, "but why are we here?" The Buddha shimmered. "It's in the nature of things." The Wabbit thought he preferred the Buddha when he was in the box. But he was respectful. "Why are you here?" he asked. The Buddha replied. "That is the Buddha Nature." The Wabbit felt like the most junior of monks. Lapinette chimed in. "Where do you feel most comfortable?" The Buddhist replied. "I am outside the Box Camera." Lapinette considered. "Where is the Box Camera most comfortable?" The Wabbit decided not to get involved. "Outside me," said the Buddha. The Wabbit was confused but wouldn't say so. "Where does that leave us?" he said. "Back where we started?" replied Lapinette. The Buddha blinked and vanished. A muffled sound came from inside the inside the Box Camera. The Wabbit was baffled. "What do we do now?" Lapinette answered quickly. "We wait for a satori moment." The Wabbit shrugged. "Could be a while." Lapinette smiled. "Let's jump!" The Wabbit looked down. It was a long way, but he grabbed her paw and they both jumped off the roof. For a second, they were surrounded by a clear green light. Then they were in the museum - and both box and Buddha had gone. "Was that a satori moment?" asked Lapinette. The Wabbit shook his head and shrugged. "No," he replied, "It was a Carlos Castaneda moment."