1. The Wabbit and the King of Rome 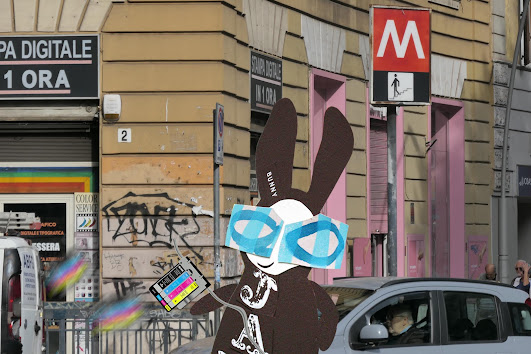 The Wabbit sauntered along, feeling benign. He'd set off on a jaunt to see where he'd end up, and he smiled in a satisfied manner as he emerged from the Re di Roma Metro Station. The Wabbit liked the name and Appio Latino was a district he didn't know well. He hummed a tune he knew from a detective series on TV. "Tum te tum te tum ta. Da da da deh deh." For a minute he imagined he was the detective Rocco Schiavone and briefly shivered in a town in the Alps. Then he chuckled. The junction seemed to be a warm pink. "Pink Corner," he thought. He looked from right to left. The graffiti wasn't interesting, but he noticed a single word. He thought that maybe the artist was disturbed and only managed to write 'The'. He speculated. What was he going to say? "The colour pink," said a voice. A flash of rainbow colours took his attention. "Ink is pink," said the voice. A print cartridge floated from the printers on the corner. The colours shimmered in front of the Wabbit. He wrinkled his nose in amusement. "The King is pink," added the cartridge. The Wabbit noticed that the cartridge was composed of many colours, but decided not to mention it. "Everything is pink," said the cartridge. "I think you're seeing through pink tinted spectacles." laughed the Wabbit, "Various shades of pink even." The cartridge seemed to nod. "Well, Kant never said that," said the Wabbit. "Did I mention Kant?" said the cartridge. Then it turned, indicating that the Wabbit should accompany him. Since he wasn't doing anything else, the Wabbit followed him up the street.
at November 10, 2022