8. Skratch, Wabsworth and the Prisoner 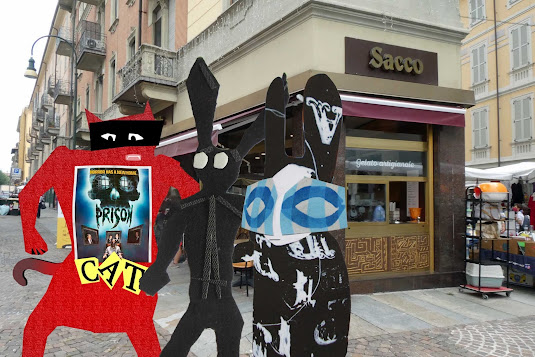 Skratch and Wabsworth guided the prisoner along the street. He was without handcuffs so as not to alarm the population. "You've been a very bad boy indeed," said Skratch. "Killing people is wrong," said Wabsworth, "even if they're in front of you at conferences." The prisoner failed to comment, but he looked at Skratch with baleful eyes. Finally he spoke. "Where are you taking me?" Skratch replied. "Taking you to the prison place, where you will be held indefinitely without trial until the end of time." The prisoner's eyes went glazed. "Just joking," meaowed Skratch. Wabsworth butted in. "You will get to choose life imprisonment or a free existence on an inhospitable planet of our choice, somewhere in the Sombrero Galaxy." The prisoner showed little hesitation. "The second," he said. Wabsworth shook his head. "It's very, very cold." The prisoner cried out, "But I'll be free." Skratch couldn't help adding some more information. "There are dinosaurs and evil flesh sucking voles," he said, "who will make your life difficult." The prisoner turned to Skratch. "I'll take my chances." Wabsworth chucked grimly. "You haven't heard everything. Every day there is a mist that sweeps in and changes your personality" Skratch gave a hiss. "Shouldn't change you much at all, except for the paranoia." The prisoner looked quite cheered. "All in all it doesn't sound so bad." Wabsworth laughed. "You are probably unaware of the Wabbit's frequent prison visits and correctional programme?" The prisoner looked tentative. "He talks for days and days, "said Skratch. "On and on and on."
at September 15, 2020