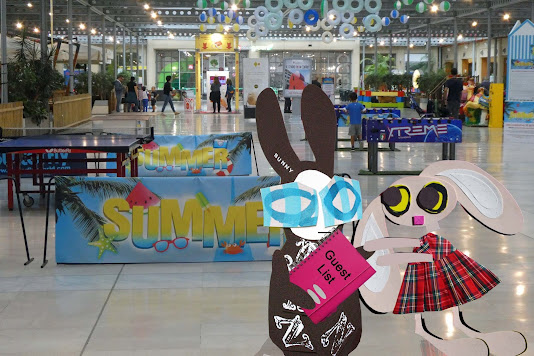 The Wabbit met Lapinette at Lingotto. For security reasons they met in the children's section since there was never many people there. "What have you discovered, Wabbit?" breathed Lapinette. "Quite a lot," he replied. He was still clutching the guest book and he waved it. "I believe the answer is in here," He gave the book to Lapinette, who leafed quickly through the pages. "Have you ever heard of Bunk MacBatfit?" Lapinette shook her head.  "Can't say I have." The Wabbit paused. "Bunk is an authority on Flights for Small Mammals - but he likes to be first," Lapinette looked blank. The Wabbit's voice was harsh. "He likes to be first in everything he does." He paused. "Have a look at the speaker list." Lapinette read the first few pages. "He's not there." The Wabbit continued. "He's on the guest list but he's not speaking," Lapinette gasped. "He must be furious." "Furious enough to kill," said the Wabbit. Lapinette rocked backwards. "He'd kill to be first to speak!"  The Wabbit nodded. "I have a plan. Do you have any sway with the organisers?" Lapinette nodded too. "Can you get me on to the speakers list to speak first," said the Wabbit. "You're going to be bait," said Lapinette. "I'm the master of bait," replied the Wabbit, "so leave the changes until the last minute." Lapinette was cautious. "I'd better get Skratch and Wabsworth onto this. They can pass as small mammals, can't they?" The Wabbit looked sceptical. "They have to look dull." Lapinette laughed. "Anything's possible."
at September 07, 2020