The Wabbit at his Adventure Caffe 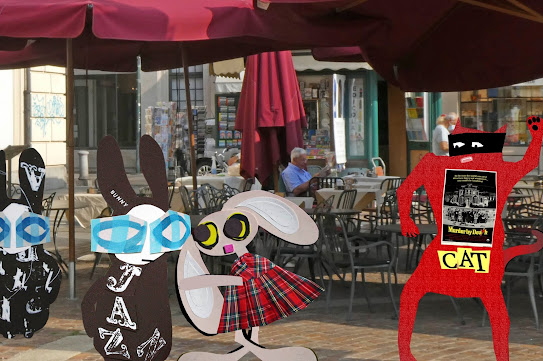 "Everyone is late," said the Wabbit. "No, they're not," said Lapinette, "here they come now." The Wabbit still had a grumbly face. "OK," he said. Skratch meaowed into sight. "Hello," he said, "is this the place?" The Wabbit was still annoyed. "Yes," he said, I suppose it will do." "It looks fine," said Wabsworth looming up from the back. "Yes," said the Wabbit again. "So what was that for a sort of adventure we had." Skratch was ready. "It was a standard linear plot," he said, "unusual only from the point of view of the characters." Lapinette smiled. "I suppose the flights for small mammals, was unusual." Skratch drew himself up to his full height. "Deep focus, objective reality and a relative lack of montage suggest that the whole thing should be left to the spectator." Lapinette scoffed. "We really can't have that, Skratch." The Wabbit was still in a bad mood. "The spectator can very well get on with it and do no work at all." Wabsworth butted in from the back. "I'm inclined to agree, Wabbit. "The spectator is left in a state of dominant specularity. The spectator has to do a bit of work - otherwise what's left." Skratch was in a state of delirium. "The complexity of reality is enough,"  he said, "otherwise we're left with overwrought formalist mediation." "What do you say to a drink," said the Wabbit. "Or is that standing in the way of the impasse of the ideological?" Skratch laughed and laughed. "Are we feeling a little tetchy today, Wabbit." Lapinette laughed too. "The Wabbit is suggesting a quasi-mystical relationship between our narrative and objective reality." "Which is four aperitivi and a packet of crisps," said Wabsworth.
at September 18, 2020