5. The Wabbit and the Double Stairs 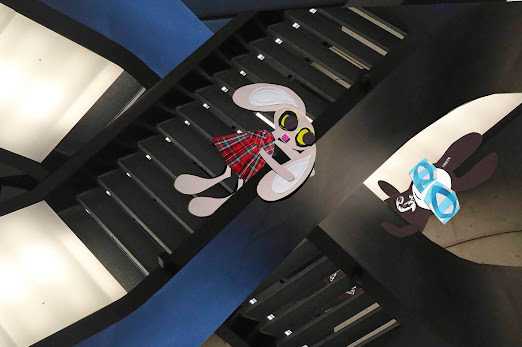 "This way," shouted Lapinette and she scampered up the stairs. The Wabbit tried to follow, and he scampered up too - but he found himself on a different set of stairs. The two stairways weaved in and out. No matter what he did, he couldn't find the other stairs. He thought he would jump but things changed quickly to thwart his efforts. Lapinette looked over the banister. "Come on Wabbit, this way to the beach." The Wabbit grinned in spite of himself and he called to Lapinette. "Who designed this stairway? Was it Escher?" Lapinette danced merrily on because both sets of stairs were ascending rapidly and the steps started to fold like an express escalator. The Wabbit hopped up and down as treads snatched at his fur. His stairway took him higher than Lapinette and he seemed to look down from a dizzying height - but then it dropped with astonishing speed. He leaned out to touch Lapinette's paw on the way past, but now the staircase turned upside down. Lapinette looked down at him from a startling height. She shouted. "You just have to think your way up. Think high, think tall." So the Wabbit thought tall, thought high. Both stairs lifted. Escalator steps shuffled like packs of cards and propelled the Wabbit and Lapinette higher and higher. He could smell sea and salty air - and fish. "I'm thinking of lunch," said the Wabbit.
at February 25, 2019