9. The Wabbit and the Platform Standoff 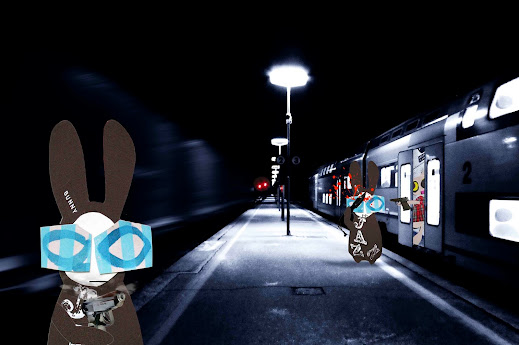 The Wabbit waited on the platform. It smelled of metal and bad gas and something else, something unnatural. A freight train blurred fast and sent a shower of gravel into his face. The Wabbit didn't blink. Another train drew into the station at a leisurely pace - a commuter train with no passengers. He slid the safety catch off his automatic and racked it twice for luck. He blew along the barrel. His breath hung in the cold air. The train screeched to a standstill. Standing alongside was the figure that looked like him. The Wabbit could see him reflected in his glasses, waving a blood spattered edged weapon. The figure drew a door open and yelled. "You're leaving the game, get on the train." Still, the Wabbit did not turn. The figure felt the muzzle of an automatic pressing just under his ear. "It's you that's leaving," said Lapinette. With her other paw she dragged him on board. The weapon clattered on the platform. The door closed. As the train began to move, the Wabbit leaped across the platform and clung to a footplate of a far compartment. The train gathered speed. It wasn't hard to lever a door and just as the train hit a bend in the track, the Wabbit tumbled into a compartment. He could hear a commotion and he ran down the train towards it. The intercom crackled with Skratch's voice. "This is the End Game Express, have your tickets ready." The Wabbit grabbed a rail as the train chattered across points and through red lights and he sang, "This train don't carry no hustlers, this train..."
at February 05, 2019