4. The Wabbit and the Ceremonial Stairs 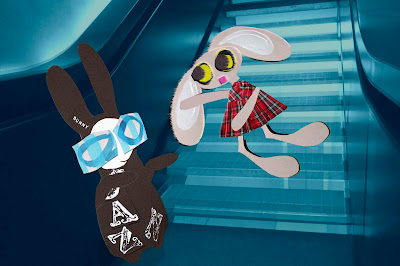 The Wabbit tried again. As he traced his way along the corridor it gave way to a staircase that shimmered in a blue light. The steps appeared to dance. The banisters shook to the rhythm of a Bossa Nova. The Wabbit felt his paws tap to the music, he just couldn't help it. He leaned against the wall but the wall shook too. Everything moved. He heard a voice. "Wabbit!"  Down the stairs danced Lapinette with her paws outstretched. He stretched out his own to greet her. "Lapinette, what is this place?" "This is the ceremonial under the beach staircase," sang Lapinette. She pirouetted twice and sailed into the Wabbits paws. The Wabbit hugged her and grinned. "Ceremony? What ceremony?" Lapinette continued to gyrate. "The Under the Beach Awards." "Oh," said the Wabbit, "who won?" "I won," laughed Lapinette, "I always win." The Wabbit shrugged. "Did I win anything?" "Everyone wins something," laughed Lapinette. She continued to dance. The Wabbit raised an eye. Lapinette paused. "Best original screenplay set on a beach award." The Wabbit's eyes lit up and he gave a little bow. "Then I'd like to thank Lapinette for dancing down the ceremonial staircase." "Why don't we dance up it," suggested Lapinette. "Where does it go?" asked the Wabbit. Lapinette laughed. "To the top of course."
at February 22, 2019