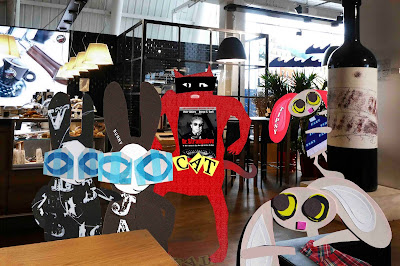 Wabsworth tapped the Wabbit on the shoulder and said "Will you ask the question?" "All right," smiled the Wabbit, "What was that for a sort of adventure we just had?" Eataly was quiet and his voice rang out. "Drink!" yelled Tipsy. She scaled the giant wine bottle then tapped it - but it sounded hollow. "Political pastiche," murmured Skratch. “It took place in a socio-semiotic framework, yet it remained undelineated." Lapinette leaned back and nodded her head. "But in terms of intertextuality, it provided an oscillation of meanings accessible to pragmatic appropriation." "Drink!" shouted Tipsy. Lapinette twitched an ear. A waiter appeared, took an order and vanished. Skratch's eyes bulged and he spluttered, "In narratological stereotypes, autonomous constructs are usually foregrounded." Lapinette held up a paw. "Only for naive readers." It was Wabsworth's turn to speak. (Being an android, he had read everything there was to read.) "The adventure was political but utilised comical sharpening, which produced negative but likeable stereotypes." "The wine is coming," yelled Tipsy. "I rest my case," smiled Wabsworth. "Wabsy, I heard that," murmured Tipsy. "Skratch creased up with laughter. "Now you have to take Tipsy to the movies." Tipsy grinned. "I like political horror." Lapinette kept a straight face. "Like They live." Tipsy slid down the giant wine bottle. "They won't if they don't bring my drink."
at January 11, 2019