6. The Wabbit and the Tidied Scene 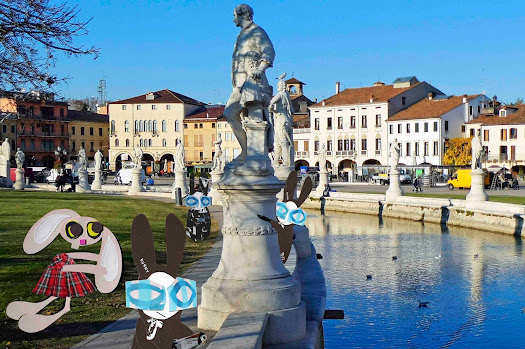 The scene changed and Lapinette started yelling. "This isn't Venice, this is Padua. I won Venice. I want Venice!" Wabsworth seemed a long way off but the Wabbit could hear him. "They seem to have tidied Venice," he murmured. "Everything's wrong," scowled the Wabbit. He pulled the automatic from his fur, but the safety catch wasn't broken and he growled, "This isn't my gun." "Don't look now," called a voice. The Wabbit's head swivelled. "There he is," shouted Lapinette. She pointed. "He looks just like you." The figure took out an edged weapon and tapped it three times on the base of a statue. "That's mine," shouted Lapinette. The figure tapped the statue again and spoke. "Nothing is at it seems." His voice was dull and watery, the sound of splashes on a jetty. Wabsworth grabbed for his automatic but there was only the walkie talkie. He pointed it anyway. It crackled into life and spoke. "This is not a gun." The scene froze. They found themselves gripped like tourists wrapped in aspic. But the figure strode up and down the parapet, yelling. "You'd be well advised to leave. Don't wait til tomorrow." Then it dived into the water and vanished. The scene returned to life and the team with it. But something rose from the water, something awful - a putrid, rancid smell. Lapinette shuddered and grasped her nose. "What on earth is that?" The Wabbit looked into the water and snarled, "Mediocrity."
at January 28, 2019