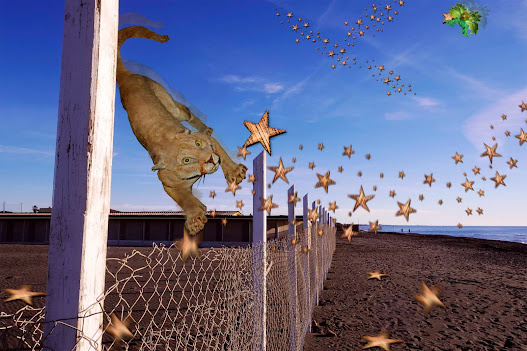 Puma was waiting as only a puma could wait. Then with a mighty roar he leaped on the stars. His claws slashed, his jaws snapped and his teeth tore at the creatures. They didn't taste of much - a mite salty maybe. They were a certainly a long way short of meat. He landed on the sand, then clawed his way up a pole and leaped again. He beat them up, batted them down and ground them to dust. But there were many and they kept coming. The more he demolished the more there seemed to be - like a swarm of annoying insects. "I could use a helping paw," he screeched. That's when he heard the frantic flapping of cabbage wings. Terni the Food Dragon came swooping down from two o'clock high, toasting the creatures with a peppery dragon breath and swallowing them in giant batches. "Gnammy, yummedy gnam!" he roared. The starry warm tried to evade him by flocking up and down and circling in a sine wave formation. But they were a poor match for a food dragon with attitude. Puma picked up a fluttering star in his teeth, shook it around then let it go. He pounced again and ripped it to shreds. "Speak you little daemons," he roared, "Speak or we'll render you endangered." The remaining stars started to whine like dynamos. Puma swept them into a hole in the sand, sat on them and snarled, "You'll answer to the Wabbit!" Terni landed and tore a massive groove along the sand. His fiery breath ignited every piece of flotsam on the beach. "I can hardly wait."
at January 05, 2019