3. The Wabbit and the Alleyway Portal 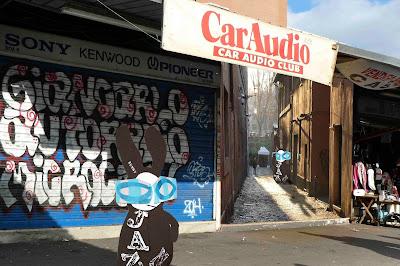 The Wabbit hopped off in high dudgeon - but he couldn't help looking back. The shutters shimmered and vanished. At first glance it looked like an alleyway between two sheds that led to the street behind. But everything was wrong. The light was wrong. The sky was wrong. The sound was wrong. Apart from the perspective, there was little that was right. But still that voice hung in the air, whispering now, "This place doesn't really exist." The Wabbit shook his head and muttered, "The puzzle has too many pieces." As if in answer, something else happened. A figure appeared. The Wabbit's fur stood on end. The figure was the Wabbit, beckoning with his paw and smiling. An orange sun drew an impossible shadow in the cobbles. "It's a cardboard cut out," thought the Wabbit - but his likeness moved towards him and breathed softly. "Duck down the alleyway." The Wabbit scowled. "I don't think so." But a hidden force dragged him towards the cobbles. The Wabbit searched in his fur for his radio, but it wasn't there. The figure waved a walkie talkie and grinned. It burst into life and crackled with Wabsworth's voice, "Come in Wabbit, come in." The figure repeated the message, mocking Wabsworth's tone. "Come in Wabbit, come in." It beckoned once more. The Wabbit's paws scuffed the asphalt as he slid into the alley. "I'm not going your way ..."
at January 21, 2019