17. The Wabbit and the Stars of Doom 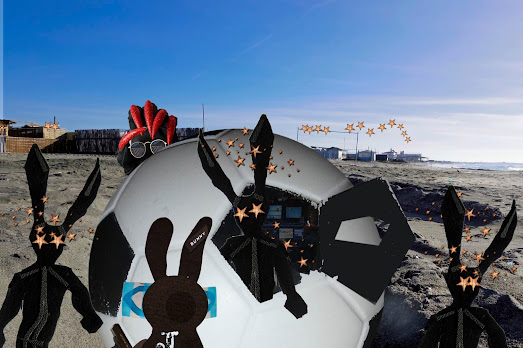 It was a bolt from the blue. The Wabbit watched the hatch swung open. Doctor StrangeGlove rapped on the hull and yelled, "Is there anyone hiding there in the dark?" Out lurched three stupefied Agents of Rabit, tiny stars revolving round their heads. One stumbled off in the sand and fell on his face. The others reeled around in a drunken fashion. "Incompetent fools," shouted StrangeGlove, "I will explode you like a boom." The Wabbit laughed grimly. "We'll keep the boom for later. Watch out for these stars." The stars whirled and merged then took off across the sand, like roosting starlings.
StrangeGlove and the Wabbit followed their path and watched them land along every structure on the beach. The noise was deafening. Then all became still. The Agents blinked. "Where are we?" "On the beach," said the Wabbit. The Agents looked unsteady, "I can't remember a thing," said one. They conferred for some time. "We are taking the vessel," interrupted StrangeGlove. "But how will we get home?" whimpered an Agent. The Wabbit waved his automatic. "Get the bus." The Agents hung their heads and headed to the road. "Augenblick, meine kleinen Freunde!" growled StrangeGlove. The Agents turned back. "What are these kleinen stars?" "They came out a packet of cornflakes," shrugged an Agent. "I was collecting them," said the second. "I have two yellows but I'm short of a red one," said the third. The Wabbit looked at StrangeGlove. "Do you like the stars?" StrangeGlove snapped a finger. "I prefer the dark."
["Augenblick, meine kleinen Freunde!":  Wait, my little friends!"  "Is there anyone hiding there in the dark?" : Return of the Pink Panther]
at January 03, 2019