3. The Wabbit and the Flyaway Kiss 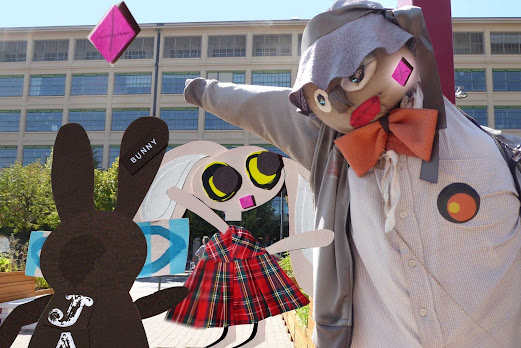 Lapinette and the Wabbit chased Lapinette's kiss through shops, streets and on trams - but the kiss didn't stop until it came to an urban organic garden. There it settled on a scarecrow's cheek and planted a resounding smacker, the sound of which could be heard some distance away. Then it fluttered onwards. Lapinette jumped up and down. "We have to find my kiss, it shouldn't be out on its own." "Let's ask the scarecrow," suggested the Wabbit. Lapinette looked skeptical but nonetheless she hopped on a bench and looked up at the scarecrow's face. "How was the kiss, Mr Scarecrow?" "The scarecrow's head swiveled to face her. "Hot," he said, pointing to the disappearing kiss. "I thought it was a pretty butterfly, I hoped it would stay." Lapinette jumped higher. "My kiss escaped from a charity event and I have to get it back." "Is it dangerous?" asked the scarecrow. He rubbed his cheek, smiled and waved to the now distant kiss. "Yes," replied Lapinette, "It could be hazardous if it falls onto the wrong face." "Then please let me help you," said the scarecrow. Lapinette looked at him. "Aren't you stuck here?" The scarecrow rustled his straw. "That's what they think," he murmured, "but I'm quite ambulant and have a spare set of clothes in my shed." "Did the kiss say anything?" asked the Wabbit. "It said mwah smooch!" grinned the scarecrow. "Ah," said the Wabbit, "That's two more clues ..."
at November 20, 2017