2. Lapinette is Swept off her Feet. 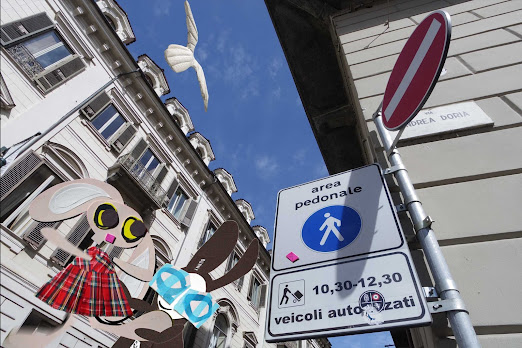 The Wabbit danced Lapinette all the way to the city centre, the city sustaining only minor damage. But at a crossroads, the Wabbit came to an abrupt halt. He hadn't run out of steam as Lapinette thought, because suddenly she was thrown in the air and then gently held in place by the Wabbit's paws. She threw her arms wide. "Where are we?" "If I knew where we were," said the Wabbit, "I couldn't have danced here." The Wabbit let Lapinette down and glanced around. "Do you think the place is here?" asked Lapinette. "I think it's a clue," said the Wabbit. "We should have proper instructions, not clues," commented Lapinette. A cooing from above took their attention as a large dove swooped from the rooftops. "Parakalo!" yelled the Wabbit. "Parakalo!" shouted Parakalo. Lapinette waved and shouted. "Do you have a message for us?" Parakalo circled three times. "I am the message," he cooed. Lapinette and the Wabbit sighed. "We're secret agents, not parlour game puzzlers." Parakalo continued to hover. Then something flew down and stuck to the traffic sign. "That looks like a kiss," said the Wabbit. "It looks like one of mine," murmured Lapinette. "Sold at a charity do?" suggested the Wabbit. Lapinette cast her mind into the dim and distant past. "Maybe," she shrugged. The Wabbit climbed the pole. "I'll get it down." "Be careful," said Lapinette, "It might still be hot."
at November 17, 2017