5. Jenny and the Unknown Menace 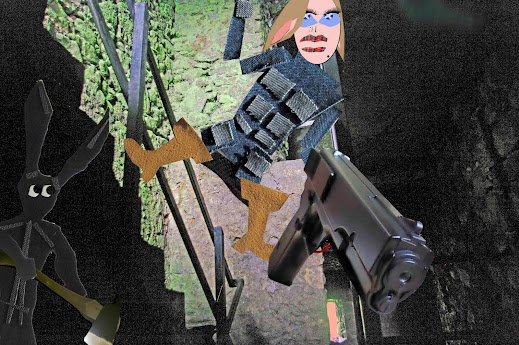 Major Spitlove crouched by the stairs. He heard music, murmuring and squeals so he clutched his axe tightly and shrank into the shadows. He didn't have to wait long. There was a burst of light as a figure launched itself from upstairs. An automatic loomed like a ship out of a mist and behind it was Captain Jenny. The gun spat three times. Each time there was a roar of anger. Jenny hit the ground with a thud and leaped into the dark. Major Spitlove peered as muzzle flashes lit a ruined hallway. He could only see amorphous shifting shapes, lapping at the walls. Rasping grated around the building like a saw on a tin roof. He heard three more shots then ducked as a bullet flew past his ears. Mortar fell on his head and dust went up his nose. "Aaaachoo," he sneezed. Jenny stepped from the gloom. "I could use a helping paw, Major." Spitlove nodded and lifted his axe. "What about the bad air?" he asked. "I'm impervious," said Jenny. She blew into the muzzle of her automatic. "Besides, I've got a cold." Spitlove hopped into the hall. "I'm on the trail of creatures who invade buildings and pose as ghosts." Jenny laughed a pirate laugh. "Fake ghosts, spooking?" Movement from the hallway made them both spin round. Jenny ejected the clip from her automatic, replaced it and fired a volley of shots. Then she shrugged. "No ghosts, no haunting .."
at November 06, 2017