3. The Wabbit and the Devil's Jig 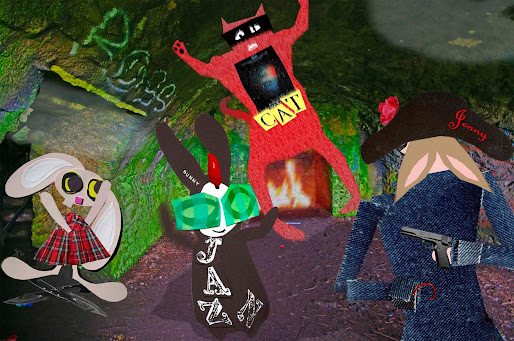 They had no option but to start the party without their pals. The old abandoned building that hosted so many abominations, came alive with hoots and hollers. "Hooch!" yelled Skratch. He sprang in the air with abandon and executed an astonishing pa de basque. Lapinette's feet flew over razor sharp blades. "Over fork over!" she chanted, again and again and again. "You started without me!" shouted a stern seafaring voice. The Wabbit binkied high and low. "You're very late," he yelled. Captain Jenny shook her head. "No, I be early." They thudded to the ground, except for Lapinette who hovered over her knives. "That can't be right," meaowed Skratch, "because midnight's long past." Jenny sniffed the air and frowned. "It's Hallowe'en!" she yelled, gripping her automatic. "Not at all," smiled the Wabbit cheerfully. "It's now All Hallows and the Saints are marching in." Jenny mimicked the sound of feet with her pirate boots and drawled, "Well they must be a long way off." Lapinette landed gracefully, picked up her weapons and threw them in the air. The Wabbit watched as they fell neatly in the folds of her frock. "That's scary," he blinked. "If it's still Hallowe'en, we're stuck in time," frowned Skratch. He looked up. Clouds of noxious gas drifted from the brickwork. Doors slammed shut. Jenny looked for a window to break, but there was only one ... high up on the roof.
at November 02, 2017