8. The Wabbit and Schrödinger's Cat 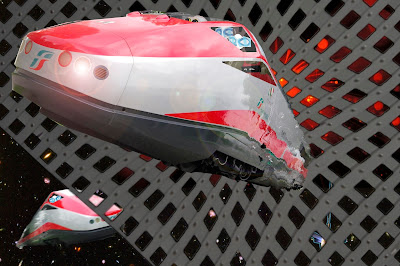 Leaving only a toasty glow and a shower of second hand heating elements, Quantum the Train shook free of the bubble, The Wabbit stared into space. Lapinette looked the other way. "There's Motor Unit One!" Everyone swivelled. "Come in Motor Unit One." signalled Quantum. "Do not enter the bubble." He tried again. "This is an all galaxy health and safety emergency. Stay away from the bubble." No communication reached him. He blew his klaxon as a last resort and saw the other Wabbit briefly glance up - but Motor Unit One continued until it disappeared deep in the folds of the spin foam oasis. "He's well delayed now," said the Wabbit through his teeth. Quantum spat out an emergency beacon. They watched it whirl and flash five times before it exploded. "The Fifth Force," growled Wabsworth. "We can't abandon Motor Unit One," said Lapinette. "Nor our other selves," purred Skratch. Wabsworth shrugged. "Don't worry. Motor Unit One will do exactly the same as we did." "In theory, we'll all be along very shortly," smiled the Wabbit. "We'll be beside ourselves," meaowed Skratch frantically. "We'll occupy the same place at the same time or my name's not Schrödinger." "Skratch, your name isn't Schrödinger," said Lapinette. Skratch hissed and shook his head. "I was thinking of changing it ..."
at December 07, 2016