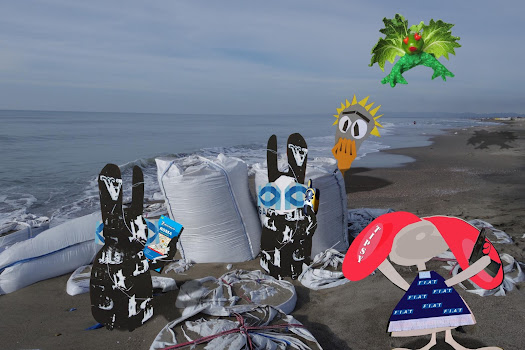 The Wabbit's android doubles seem to be having fun in their own company. Despite the data transfer, Wabsword hadn't quite caught up. Wabsworth said it was only a matter of time. Wabsword nodded and chortled. "No time like the present." He looked along the coastline and Wabsworth followed his gaze. "I think the Fifth Force will come from the sea." They considered the matter with much muttering but Tipsy suddenly leaped in the air. "Panico! Terni!" Panico hurtled along the beach with a clenched a fist over his mouth. "We're all going to die!" "Not before our date," yelled Tipsy. Panico dropped his fist and smiled. "Are we going to the movies? They won't let us in."  Wabsword was confused. "Who's Panico? And what's that dragon? He looks like a cabbage." Terni batted his cabbage wings and the resulting wind swept sand along the beach. "I didn't fall off a truck, you know." Wabsworth spoke into his radio. "Wabsworth. Read?" The radio crackled viciously and the Wabbit spoke. "Roger that. What's your 20?" "On the waterfront," responded Wabsworth. "Everyone there?" asked the Wabbit. "Negative," answered Wabsworth. "Waiting for the two Skratches and Puma." The radio burped and whistled. "Stand by," Panico struck the sand-filled sugar bags and yelled anxiously. "They won't be on time." Terni wheeled in the sky. "I'll pick them up." The radio crackled. "Obtain," said the Wabbit, "but not by the fur."
at December 27, 2016